I thought it would  be useful to start off by defining what a turret clock is.

From Wikipedia the definition of a turret clock is:-

A turret clock or a public clock is a clock that is larger than a domestic clock and has a mechanism designed to drive a visual time indicator such as dials and or bells as a public amenity. Turret clocks specifically had mechanisms mounted high in a building often a purpose built tower such as churches town halls and other public buildings. Clocks were not referred to as turret clocks by clockmakers until recent times, often old clocks were recognised as turret clocks by their location.

A true turret clock has mechanical and latterly electrical power and therefore sits late in the history of timekeeping. 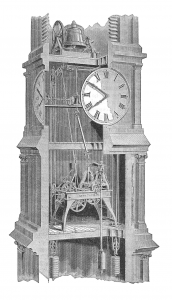 1 thought on “What is a turret clock?”